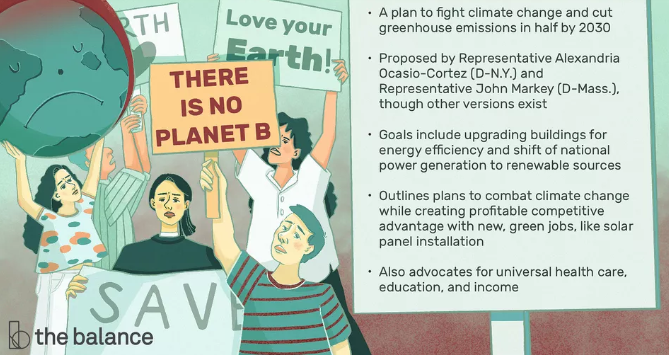 Author: Kimberly Amadeo
Publisher: The Balance
Published: 22 Jun,2023
Image by Julie Bang © The Balance 2020
The Green New Deal is a plan to fight climate change. It would reduce greenhouse gas emissions, cutting them in half by 2030.1 That’s what it would take to limit global warming to less than 2.7 degrees Fahrenheit by 2100. It’s the Paris Agreement’s most ambitious climate goal.2

To achieve its goal, the plan calls for the United States to switch to 100% renewable energy by 2030. As of 2018, only 11% of the nation’s energy consumption came from renewables, according to the Energy Information Administration. Another 8% was generated by nuclear power. Although it’s not renewable, it also doesn’t emit carbon dioxide.3

At its core is the recognition that the oil and carbon-based energy system must be changed to reduce further emissions. Technology must be introduced to absorb existing CO2 levels. Otherwise, scientists warn temperatures could exceed a tipping point that leads to hothouse earth.4

Details of the Plan

On Feb. 7, 2019, Representative Alexandria Ocasio-Cortez (D-N.Y.), and Representative Edward Markey (D-Mass.), introduced a five-page nonbinding resolution to the House. Sixty House members endorsed the plan. So did four Senate Democrats running for president. That ensures that solutions to climate change will be a major issue in 2020.

It includes seven goals previously introduced by Ocasio-Cortez:
The resolution also requires that any new infrastructure spending must address climate change. It wants the government to push for more zero-emissions vehicles and invest in high-speed rail and other public transit.

The Green New Deal adds some goals to address income inequality. The effects of climate change are worse on low-income people. For example, droughts raise food prices. Low-income households spend a greater percentage of their earnings on food and can least afford higher prices.

Businesses can create a profitable competitive advantage by adopting Green New Deal goals. States, like California and Hawaii, have already set goals to become carbon-free.6 7 Nations are seeking to meet their goals under the Paris Climate Accord. So have 20 states and 110 major cities, as of 2017.8 As the price for wind energy and solar power falls, companies that source renewable energy may be ahead of those that don’t.

It could make universal health care available. It also advocates a universal basic income. This is a government guarantee that each citizen receives a minimum income. It pays enough to cover the cost of living.

Surprisingly, the Green New Deal does not include a carbon tax or a cap and trade program. These programs raise the cost of carbon fuels, like gasoline. That could hurt lower-income families more, especially those in rural areas who rely on an automobile. It was one reason the “yellow vest” protesters in France opposed a gas tax. They felt it was another sign that the very wealthy ignored their needs.9

It also does not ban fossil fuels. Similarly, it doesn’t exclude nuclear energy and hydropower which are often opposed by environmental groups.5

In October 2018, the United Nations international climate science panel released an alarming report. It found that the effects of global warming could become irreversible by 2030 without rapid action. The West Antarctic ice sheet could melt, raising sea levels another 4 inches. Without the ice sheet to reflect the sun’s rays, oceans would absorb even more heat. That would melt more ice, worsening the heating cycle.

At least 100 million people would die from increased heat waves, drought, and infectious diseases. The heat would also kill off 90% of the world’s coral reefs.10

Since the 1880s, the earth’s average temperature has risen 2.1 Fahrenheit. That’s 1.2 degrees Celsius. Warming is occurring at a faster rate than at any other time in the Earth’s history.11

Why the Green New Deal Needs to Happen Now

Ocasio-Cortez made the New Green Deal a cornerstone of her 2018 campaign. In an article for The Atlantic, she said, “This is going to be the New Deal, the Great Society, the moon shot, the civil-rights movement of our generation.”12

Congress is paying attention to her success. She beat an incumbent who outspent her by 10 times.13 They are more willing to listen to her and her supporters.

On March 26, 2019, the Senate voted against a new bill from December 2018.14 Republicans planned to use the vote to accuse Democrats who voted for the bill as unrealistic socialists. Four Democrats in moderate states voted against the bill. All other Senate Democrats voted “present” to avoid an intraparty fight. According to The Washington Post, Ocasio-Cortez said the vote was a sham since there were no hearings or expert testimony. Some Republicans are drafting their own proposals but the Republican party does not have a plan to stop global warming.15

In March 2019, House Democrats drafted a bill requiring the United States to live up to its commitment under the Paris Climate Accord. It also announced a committee to report on the economic and national security consequences of Congressional failure to do something about climate change.16

In April 2019, Ocasio-Cortez released a video that added details to a Green New Deal proposal. She advocated national high-speed trains, restored wetlands, and universal healthcare.17 The Sunrise Movement will promote the Green New Deal in an eight-city tour ahead of the 2020 election.18

The popularity of the Green New Deal has sparked other versions. New York’s Governor Andrew Cuomo announced a Green New Deal for the state’s 2019 executive budget. It would make electric generation carbon-free by 2040 and create a council to do the same for the state’s entire economy.19 Critics prefer the Climate and Community Protection Act which wants the entire state to be carbon neutral by 2050. It also allocates funds for low-income communities that suffer the most from climate change.20

Former 2020 presidential candidate Beto O’Rourke launched a Green New Deal as part of his campaign. He would have spent $5 trillion over 10 years to build infrastructure. He wanted a federal law to make the United State have zero carbon emissions by 2050. He wanted to fund communities hit by wildfires, floods, droughts and hurricanes. He proposed regulations to reduce methane leakage from the oil industry, reduce hazardous waste from power plants, and raise fuel-economy standards.21

The Green New Deal was first introduced in the 2016 presidential election by Jill Stein, the candidate for the Green Party. It committed to 100% renewable energy by 2030, costing $200 billion. It would create a Renewable Energy Administration to create up to 20 million new green-centered jobs. That would cost $400 billion a year. It also included free education through college.

It paid for these programs in three ways. First, by cutting the defense budget by 50%. Total U.S. military spending is $890 billion a year. Second, it advocates a $60 per ton carbon fee, generating $360 billion a year. More progressive taxation on the super wealthy would raise $130 billion annually. It proposes a 70% tax on income above $10 million.24

The research group Data for Progress also outlines a Green New Deal. It is broad in scope yet detailed. It includes clean air and water, reforestation and wetlands restoration, and zero waste by 2040. It would create 10 million new private and public sector jobs.25 Its research shows that most Americans support the Green New Deal’s jobs program.26

In 2016, a bipartisan group of House members formed the Climate Solutions Caucus. The caucus is affiliated with the Citizens’ Climate Lobby, which supports a carbon fee.27 It has 72 members.28

In 2011, the Environmental Protection Agency used its powers under the Clean Air Act to limit carbon as a pollutant.29 The Trump administration terminated the Clean Power Plan.30

In 2009, the American Reinvestment and Recovery Act jump-started the alternative energy industry in America. It provided $17 billion in renewable energy tax cuts and $5 billion to weatherize homes.31

The Deal goes beyond the 2007 Select Committee on Energy Independence and Global Warming. Pelosi formed it when she was first elected speaker in 2007. Republicans eliminated it when they took the majority in 2011.32

In 2009, the American Clean Energy and Security Act was approved by the House of Representatives. But the bill never passed the Republican-controlled Senate.33

In 2005, the federal government mandated food-based biofuels. It raised food prices, causing riots in 2008.34 Ethanol and biodiesel seemed cleaner than fossil fuel, but their production destroyed ecosystems that absorbed carbon.35

There are 111 members of Congress who supported the proposal for a Select Committee for a Green New Deal.18

There are hundreds of groups that support the Green New Deal. One of the most visible is the Sunrise Movement. It focuses on stopping climate change. Another supporter is MN350, a Minnesota-based global movement aiming to spread awareness and education on climate change.

Republicans oppose the Green New Deal. For example, Sen. Cory Gardner, R-Colo., told POLITICO, “Green New Deal? Sounds like a lot of red ink.” Republicans will argue that it will increase the debt. But they have overseen growing deficits, some of which resulted from Trump’s tax cut. There are even moderate Democrats who don’t believe the plan is necessary.36

Physicist Christopher Clack estimates constructing new generation would cost at least $2 trillion.37 Others warn that it would plunge the world into a second Great Depression.38

Other opponents accuse the Green New Deal of ushering in socialism because it advocates universal education.39 Some warn that it wants to get rid of cows because they emit methane. Still, others conclude that the plan will end auto and air travel because of CO2 emissions.