The global datasets of the Opportunity Mapping tool for ecosystem restoration and protection are suitable for global assessment and regional scale analyses, but their coarse spatial resolution (10 x 10 km cells) makes them unsuitable for national or sub-national applications. Therefore, where these are available, higher resolution datasets can be used to develop higher resolution analyses of ecosystem coverage and hazard exposure

The methodology used for these national- or sub-national datasets is very similar to the one for the global products, with slight modifications to fine-tune the approach at the national level. 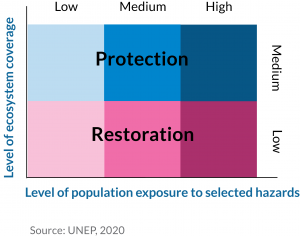 Below are a few examples of maps that were developed at the country scale, using free and openly available datasets. 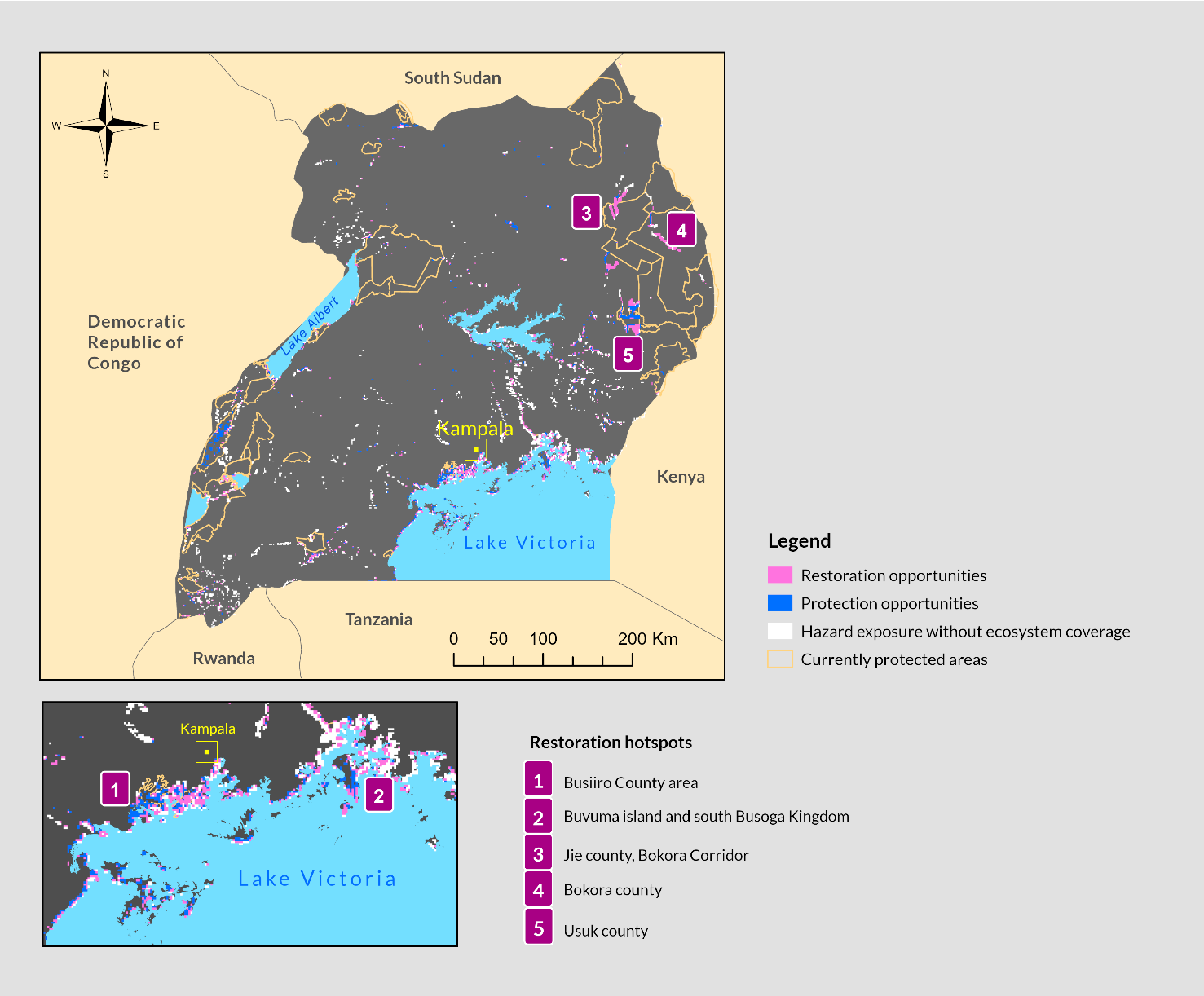 Map analysis: As we can see from the above maps, several areas in Uganda would benefit from ecosystem-based approaches to reduce flood and landslide risks.

On the shores and islands of Lake Victoria Crescent, nearly 24,000 people could benefit from ecosystem protection and restoration to reduce flood risks. In this region, interventions could probably focus on riparian vegetation restoration as well as riverine buffer zoning, as was highlighted by the stakeholder consultations from the Forest Landscape Restoration Opportunity Assessment Report. South-west of Kampala, in the Busiiro county, the restoration of 264 km² of lakeshore vegetation could protect approximately 6,700 people from river floods. On Buvuma island and south Busoga, the restoration of an area of 345 km² could provide flood protection to nearly 9,000 people annually.

The Karamoja region, a semi-arid area where most of the population rely on agropastoral or pastoral livelihoods, would also benefit from ecosystem restoration. Three main priority areas for intervention were identified: an area in the Jie County, the Bokora Corridor Wildlife Reserve and an area in Usuk County.

Ecosystem-based approaches to reduce landslide risk would benefit the south-west of the country, in the Afro-montane region, the highest region of Uganda. Our tool identified a large area in the Rwenzori Mountains as an area to protect. Fortunately, it already is a designated National Park. 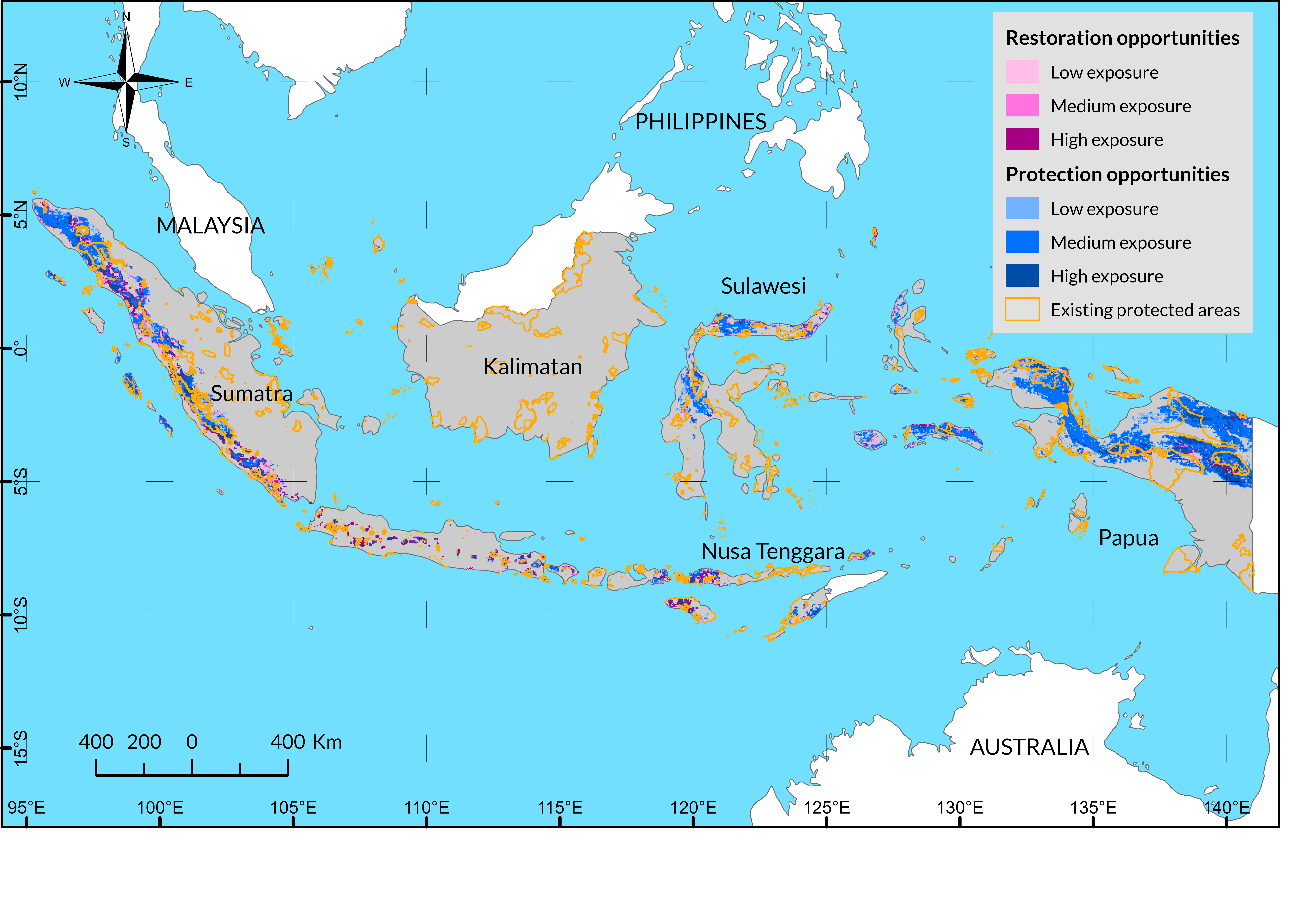 Map analysis: Indonesia is highly prone to landslides (both earthquake- and rainfall-triggered), with 70% of its population exposed (185 million) to these hazards across its territory. The country also contains one of the largest expanses of rainforests in all Asia. Our tool indicates that Papua would benefit mostly from protecting its tropical rainforests for reducing landslides, especially in the northern and western part of this province. Some of these areas are already within designated protected areas such as the Memberamo Foja Wildlife Reserve in the northern part. In Sumatra, many of the western areas of the island could benefit from ecosystem protection. This area, located around the Semangko fault, is known for its volcanic activities. Studies have identified that removal of vegetation covering slope surfaces and land use changes have triggered numerous landslides in this area. Sumatra island is one of the territories most impacted by tree cover loss in Indonesia. The plantation of deep-rooted vegetation is a popular remediation measure by local authorities and communities, due to its relatively low cost. 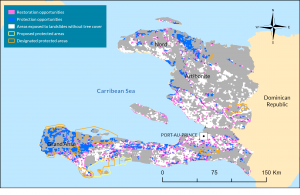 Map analysis: On the steep slopes of Haiti where soil erosion is high, forest and agroforestry systems can prevent further landslides by stabilizing slopes. Protective measures could be taken in Grand’Anse and Sud departments, at the tip of the Tiburon peninsula, in areas where agroforestry systems dominate and where the last pristine forests reside (Macaya National Park). In the rest of the country, protective measures could be taken in the Nord department, just south of the city of Cap-Haitien, and in Artibonite, south of Gonaives.

This work has been conducted jointly by UNEP and UNEP GRID-Geneva with funds from the European Union.