The Intergovernmental Panel on Climate Change 2021 Report warns that extreme weather events are likely to become more frequent as a result of climate change. Although wildfires are a natural phenomenon, this year’s record-breaking heatwaves and drought have increased their frequency, strength, and impact. In 2021, parts of Europe and North America have experienced the worst fire season ever recorded.

On October 13th, International Day for Disaster Risk Reduction, PEDRR would like to bring attention to this global issue as well as one possible Nature-based Solution to it, through a story of learning and resilience, from the inlands of Indonesia.

“The peat fire was so difficult to extinguish, we did not know how difficult it was before it happened. After the fire started, we were so frustrated by its impact on our health and by our inability to stop the spread of fires” said Polaria Derita Sianipar, a 50-year-old lady who lives in Muara Manompas – a village area located on a peatland in Muara Batang Toru Sub District, South Tapanuli, North Sumatera.

Every day she helps her husband to take care of a 2-hectare palm oil plantation, which is their source of income. She noticed that their crops were decreasing, year after year. Many of their palm trees had been uprooted because of land subsidence. This is when the land surface lowers because of peat drainage, making it shrink and become denser. Furthermore, with temperatures rising and rainfall becoming less frequent, drained peat becomes a perfect fuel for fires.

On August 9th, 2020, the peatland burned. The fire originated from the area directly adjacent to the palm oil concession area, lasted for 9 days, and destroyed at least 55 hectares of the village peatland. Even though the point of origin was not that close to Polaria’s plantation, the fire rapidly spread below the land surface through the peat reaching her crops. When this happened, she and several female members joined other community groups’ members in the firefighting efforts. 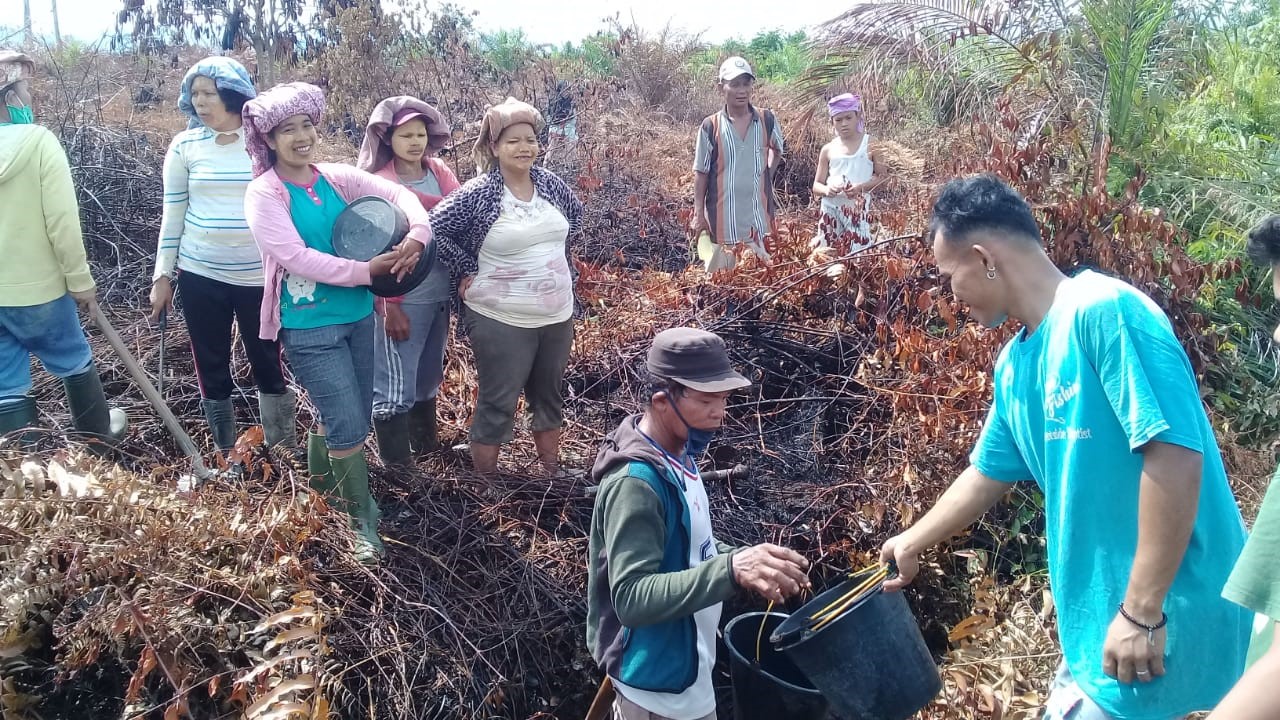 South Tapanuli is one of the last bastions on the island of Sumatra peatland. Nearly 70% of the peatland area in this district has been converted into large-scale oil palm plantations, for which deep drainage was applied. Peat drainage and conversion to palm oil has been going on for the past 30 years; not only by private companies, but also by the community. This has had a negative impact on the environment and increased the risk of peat fires. Native peat tree species have been replaced by oil palm monocultures, impacting local biodiversity. The productivity of oil palm on peatlands is low, as many palms are uprooted before they bear fruit, reducing the economic benefits for the communities.

Based on this situation, UNEP and Partners for Resilience (PfR) chose this location as a pilot area for a Community-based Peatland Restoration Program – financed by the European Commission Department for International Partnerships (EC-INTPA). Starting in January 2020, the project was implemented by Wetlands International Indonesia together with 15 community groups in Muara Manompas and Terapung Raya Villages, South Tapanuli.

Community groups are trained in monitoring water levels to anticipate and assess the risk of peat fires, as well as trained in fire extinguishing. Community members participate in peat water level measurements, creating borehole and dip wells (peatland ground water monitoring well) and practicing early warning. They also are trained to construct and maintain canal blocking structure that being developed by the project to block the water in the canal and to rewet the drained peatlands. After being re wetted, the community also being trained to prepare seedlings for re-planting and taking care of the tree nursery, to conduct the planting and plants maintenance activities

Bio-rights mechanisms are implemented in the project: as communities receive training and actively participate in the restoration activities, they get limited loans for alternative livelihood activities. These are interest-free loans for the development of sustainable small-scale businesses, which will allow them to generate additional profits and improve their livelihood. This loan will turn into grant once the community is able to prevent fire at the project location and ensure that there is an 80% survival rate of native peat plants.

One of the most important lessons learned in August 2020 is that cooperation between community members, agencies and authorities, including the police department and military forces, is necessary and is strengthened through combined activities. In August, the community set up and operationalized community-based fire brigades. Since January 2021, regular coordination meetings and collective activities on fire prevention are conducted. Started from March 2021, the community, using their own resources, built 11 peatland monitoring towers to detect possible fire outbreaks in the coming dry season. They also build a 29-unit water reservoir to provide water resource for rewetting the peat as well as for fire extinguishing. Since the incident in August, there have been no more large-scale peat fires reported, as the patrol team has managed hotspots early on. 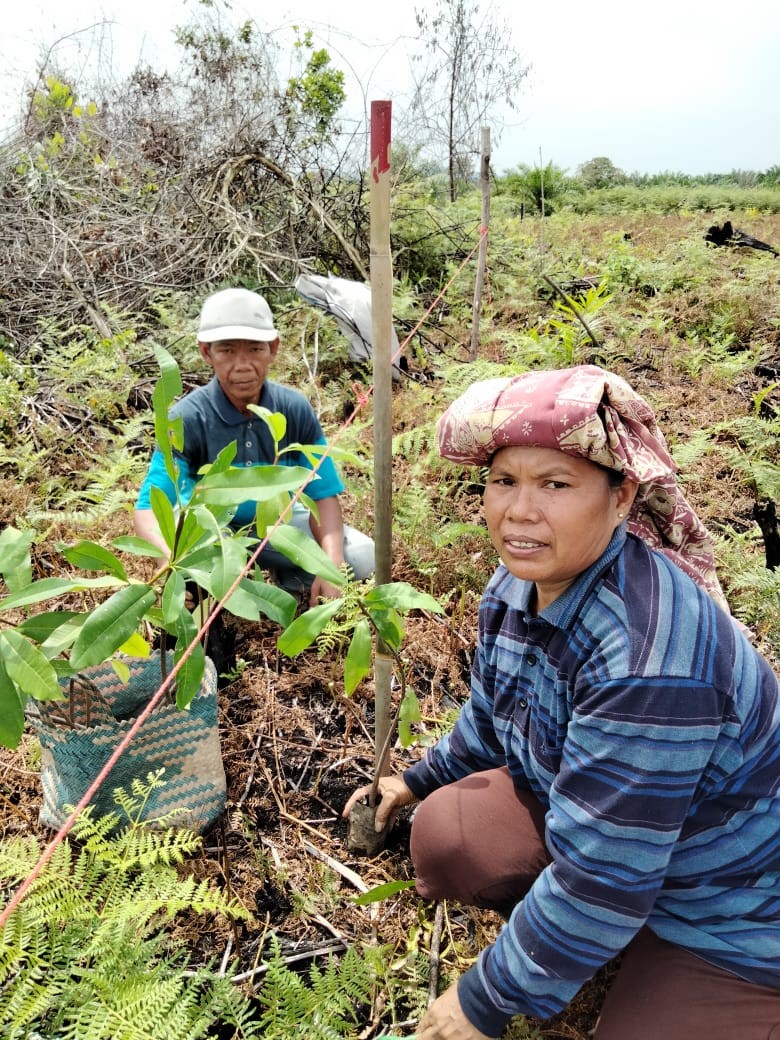 In terms of new more sustainable livelihood activities, , community members have planted native Jelutong plants on 50 hectares of the target revegetation area. Jelutong is known for its latex, which can be used as material for chewing gum or other latex-based products. It is expected that the community can harvest the latex ca. 7 years after planting.

run individually or collectively. With an initial capital of 100 to 150 euro/person at the first stage, profit obtained from the businesses ranges from 40 to 320 Eur/month.

“We are very grateful because we can protect our peatland through this program. It has a big impact on us, on our land, which is protected from fire. We can accumulate savings in the form of plants that we can harvest in the future, and with the loans we can start small businesses at home and increase our family income”, said Polaria.