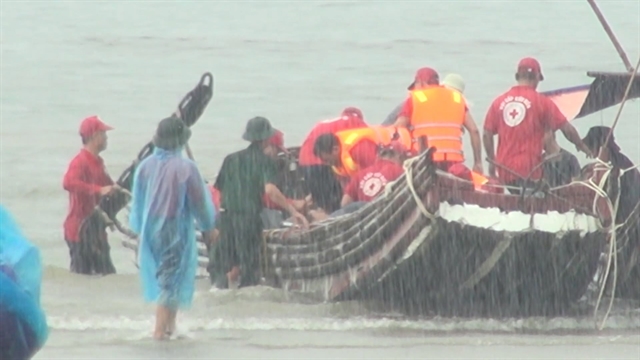 A disaster prevention drill was held on the beach following the meeting with a simulation involving a fierce storm hitting the city. — VNA/VNS Photo Hoa Mai

HÀ NỘI — A ceremony was held in Hà Nội on Saturday in response to the International Day for Disaster Reduction to review the impacts of natural disasters and climate change in recent years, and form plans for future co-ordination activities.

The event was held by The Central Steering Committee for Disaster Prevention and Control, UNICEF, UNDP and the Ministry of Agriculture and Rural Development (MARD).

This year’s theme was: “Substantially reducing disaster damage to critical infrastructure and disruptions to services, among them health and education facilities, including through developing their resilience by 2030,” with the message “Build to Last”.

Hiệp expressed his hope that with the efforts of the Vietnamese Government and people, as well as the support of international organisations in terms of technical support and disaster prevention facilities, Việt Nam would increase its resilience against climate change and reduce the damage caused by natural disasters.

At the event, leaders from the agriculture ministry signed co-operation documents in the framework of the Partnership for Environment and Disaster Risk Reduction. This marked an important step in increased co-operation between the Vietnamese Government and its partners in preventing, fighting and reducing disaster risks and climate change impacts.

At the end of the ceremony, deputy head of the Central Steering Committee for Disaster Prevention and Control, Trần Quang Hoài, introduced the Bé và các vị thần (Kids and Genies) programme, a contest on disaster prevention for members of the Hồ Chí Minh Vanguard Children’s Union.

The Central Steering Committee for Natural Disaster Prevention and Control in cooperation with the Ministry of Information and Communications, Vietnam Journalists Association and the United Nations Development Program (UNDP) also launched the first national press award on natural disaster prevention and control in 2019 with the topic “Mitigation of losses due to natural disasters – Proactive adaptation to climate change starting in the community”.

There are 05 types of newspapers considered for the award: Print Newspaper, Electronic Newspaper, Radio, Television and Press Photo.

All Vietnamese citizens, including professional and non-professional journalists whose press works conform to the criteria of the Prize, are entitled to submit their entries.

Time for submissions is from the launching date to the end of March 31, 2020.

A disaster prevention drill was held on the beach following the meeting with a simulation involving a fierce storm hitting the city. — VNS