The scale and speed of biodiversity loss threatens people and life on earth. Populations of mammals, birds, reptiles, amphibians and fish have declined on average by 60% in the past 40 years – freshwater species are going extinct even more rapidly than terrestrial or marine species with a population decline of 83% between 1970 and 2014 alone.

Today, as we mark World Wetlands Day under a biodiversity theme, we must all recognize that 2020 provides us with a unique opportunity to make an ambitious global commitment to protect and restore our wetlands and the biodiversity that both depends on and underpins them.

habitats are ongoing, they are still inadequate, underlining the need for better integration of conservation and operational plans to ensure greater progress. Conservation plans must go beyond protected areas, and greater efforts and investments are needed for species recovery and re-introduction.

2020 is a crunch year for the biodiversity and climate emergencies. Governments will review international agreements relevant to this challenge, including the Convention on Biological Diversity (CBD), the Sustainable Development Goals (SDGs) and the UN Framework Convention on Climate Change (UNFCCC). We have a brief window of opportunity to reflect on progress and set out recommendations that can inform these agreements and guide future policy responses, which are based on the wise use and management of wetlands and wetland-dependent biodiversity. 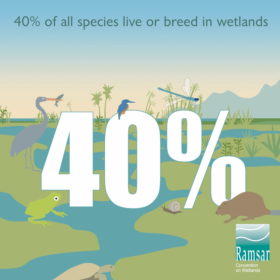 Wetland ecosystems host remarkable biodiversity: 40% of all species live or breed in wetlands. They are also our life support systems, providing us with water, food, protection from floods, droughts and storms and livelihoods for over 1 billion people. If we are to accelerate climate action then we must reverse the decline of natural wetlands, as they are central to any hopes of tackling the climate emergency facing our planet.

As the wetland community comes together on World Wetlands Day, we must all pay specific attention to wetland biodiversity. Biodiversity is the web of life. One species sustains another and once extinct, the domino effect of disruption can have dramatic consequences on the integrity and resilience of the ecosystem as a whole and ultimately on our food supply and human survival.

Accelerating implementation of environmental flows with due consideration for social and environmental impact of dam infrastructure such as in the Inner Niger Delta in Mali.
Improving water quality, managing exploitation of freshwater species and controlling non-native species invasions by implementing and following-through on comprehensive decision making processes such as the Water Framework Directive and the Habitats Directive or the Lake Chilika management plan
Protecting and restoring critical habitats such as dryland lakes like those in Ethiopia’s Central Rift and coastal mangrove systems using Building with Nature concepts proven in Indonesia and Guinea-Bissau.
Safeguarding and restoring river connectivity by working at basin level to link upstream and downstream processes and stakeholders such as in the Paraná-Paraguay wetland system, such as the Corredor-Azul programme.
These are crucial to ensuring that we create a world in which our wetlands, and the people who depend on them and their biodiversity, are thriving. This would help to urgently accelerate the work of countries in mobilising the Strategic Plan of the Convention on Wetlands while ensuring harmonisation and implementation of complementary global conventions.

Given the urgency of the challenge, we must seize the opportunity in 2020 to reform the existing approach, define new and achievable targets, stimulate the investment and deliver on concrete action.

You can show your support by joining the conversation at #WetlandBiodiversityMatters and #PartnersForWetlands.

Original article can be found here