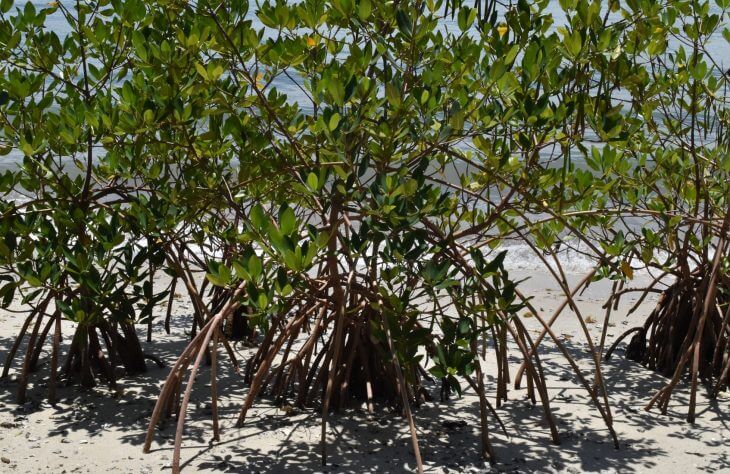 Today, as we near the end of this hurricane season, The Nature Conservancy, University of California Santa Cruz, and RMS publish a new scientific study that quantifies the effectiveness of mangroves in reducing flood risk to people and property. The study finds that mangroves significantly reduce annual and catastrophic damages and are a strong first line of defense for coastal communities.

The study, Valuing The Flood Risk Reduction Benefits of Florida’s Mangroves, led by a team of scientists from the engineering, insurance, and conservation sectors, concludes that mangroves in Florida prevented US $1.5 billion in direct flood damages and protected over half a million people during Hurricane Irma in 2017, reducing damages by nearly 25% in counties with mangroves. With coastal challenges created by growing populations, burgeoning development, and climate change, risks to people and property from flooding and storm surge are on the rise. Mangroves provide valuable flood protection and risk reduction benefits to these coastal areas, and yet are a threatened species.

The study uses the risk insurance industry’s latest and most rigorous high-resolution flood and loss catastrophe models and an extensive database of property exposure to estimate property damages from storms with and without mangroves in Florida. The report shows that mangroves significantly reduce flood levels during a catastrophic event such as Hurricane Irma.

The report goes further to show the annual benefits from mangroves across many storms. In Collier County, the team analyzed flood damages for 100 storms and found that annual flood damages would increase by 25% should the county suffer the loss of its mangrove forests.

Mangroves are most effective in flood risk reduction where they are abundant and located in front of areas with high densities of people and property. In Lee and Collier Counties, closest to where Hurricane Irma made landfall on the Florida mainland, mangroves are estimated to have prevented losses of $802 million and $580 million respectively. In vulnerable Miami-Dade County, urban coastal mangroves protected high-value coastal properties from over $134 million in potential flood damages.

The study also identifies that in cases where properties were developed in high risk areas in front of mangroves, the presence of those mangroves could increase damages to properties.

“Mangroves can be remarkably effective as natural defenses against storms, and this study shows that we have the tools to measure their effectiveness as we would for any other coastal defense,” said Siddharth Narayan, a coastal engineer at the University of California Santa Cruz and lead author of the study.

The findings make a compelling economic case for protecting and restoring mangroves as natural defenses for risk reduction. Consideration of the economic value of these natural systems is critical in planning and development along Florida’s coastline, where mangroves currently occupy only a fraction of their historical extent because of development and other hydrologic modifications.

“The magnitude of benefits provided by mangroves are all the more essential for our coastal communities as they experience heightened risk of flooding and extreme weather conditions. This study further strengthens The Nature Conservancy’s commitment to protecting and restoring mangroves as an important investment and risk reduction strategy.” said Temperince Morgan, executive director, The Nature Conservancy in Florida.

The study is one in a large body of growing evidence that coastal habitats serve as critical natural defenses from storms. The new study complements recent work on the value of Florida’s reefs for storm protection, which further highlights the billions of dollars in benefits that these habitats deliver to Florida taxpayers.

“This study underlines the critical role played by natural defenses in the reduction of economic losses from hurricane-driven storm surges and the importance of properly accounting for mangroves and other coastal habitats in coastal flood risk models. Modeling the impact of mangroves at high resolution, we can put a value on the risk reduction benefits they bring to coastal properties every year,” Christopher Thomas, Lead Modeler at RMS.

“This work helps to identify where to invest cost effectively in habitat restoration and conservation, which is critical for building coastal resilience” said Michael Beck, UCSC Professor and project team leader.

The study was led by the University of California, Santa Cruz; Risk Management Solutions, and The Nature Conservancy with support for this project provided by the Walton Family Foundation and the Herbert W. Hoover Foundation.